12 Most Difficult RHCP Songs On Bass

I thought it would be fun to put Flea in a spotlight and make a list of Red Hot Chili Peppers songs that are hard to play on bass.

I’ve spent years playing in a band whose setlist consists mostly of RHCP covers. So this list will be highly subjective. Songs won’t appear in any order of difficulty – that’s just impossible. There will be a comment for each song about what’s complicated about it.

This is a great listening practice even if you’re not a fan of music by the Red Hot Chili Peppers (duh – is there a person like that?).

Task: while listening to the songs, see if you can identify sections I’m making comments about.

Flea plays this one with a pick. If you’re into RHCP, I bet you’re a fingerstyle bass player. You say things like: “real bass players play fingerstyle”. Lack of pick playing experience will make this song challenging to get down. To make matters worse – the whole song is played in steady 16th notes with no rests. Easy to survive intro and one verse, sure. Try to keep it up for a full song! It’s hard.

This song features a lot of hoops and groove changes to jump through. The chorus part is, of course, slapped. There is also an envelope filter (auto-wah) interlude section. Flea slaps it. It gets tricky to get it right. Overall, the most delicate part is to lay down all the funky fills correctly in time, and if you made it all the way through and think you’re done… Nope! There is an outro slap part which is in a completely different groove, so yeah – some hard to play bass lines in this one!

Alright, alright, I know that Red Hot Chili Peppers haven’t been playing songs from Uplift Mofo Party Plan album for a while. Do you think it’s questionable if they can still do this one after all those years? It’s a crazy song overall. What’s difficult about the bass part are the quick slap passages played in the first verse. Quick slap licks that Flea fires a barrage of in this song are so tricky to get down.

This song is an unexpected choice, right? It doesn’t sound that hard. I guess the drummer will be sweating more because of the displaced kick drum pattern. This song actually has a secret bassist kill switch: stamina. You need a lot of strength and endurance to get through this one. I bet your hands will be burning and giving up control as early as the first chorus hits. Both hands are on the afterburner in this one from the get-go. The left hand has to deal with a lot of chromatic lines. To get a proper Flea sound, you need to really dig in with the right hand. Pluck those strings like there’s no tomorrow. So yeah – there you go, good luck with this one.

A true classic on probably all the similar lists ever made. Bass players just starting out often pick this one out to learn. I guess it feels doable, but it quickly becomes evident that it was a clever disguise. What’s unique about this song that makes it so challenging to play? Three things actually. First, there’s this intro that has a weird descending line. It incorporates lots of hammer-ons. It’s so easy to lose track of what you’re supposed to play. It’s especially true when drums come in in the intro to throw you off. Next, verses have this ultra-compressed-staccato kind of bass line. You really need to be careful to both get in the groove and to keep everything clean sounding and punchy. Finally, there’s this break (2:13 in the video), that ends with an impossible fill. That bass lick is, in my opinion, the signature lick of the song. You need to get it down if you’re a true fan.

This one features double stop slaps in the verse. Nothing to get excited about, but might feel so awkward if you’ve never done it before. Then it comes chorus with a tricky to play fingerstyle line that’s both fast and needs to fit a small groove window to get it right. So yeah – this one is an excellent workout for sure!

With this song, it’s easy to pinpoint what makes it difficult. It’s the disco octaves groove in the chorus. If you get it down and build up the stamina to keep it going without messing up, then you’ve mastered this song. That’s a big IF.

Two sections are quite challenging to get right in this song. First, there are slap parts in the verses with lots of neat little fills. The basic version of the slap groove in the verse is not that difficult on its own, but to get all the fills and licks right, it is. Then there’s the solo. Again nothing special or speed limit breaking, but if you’ve never played solos on bass you’ll find this one a challenge to get down just right.

Naked In The Rain

The coolest part of this song is the smoking hot bass solo. It’s not the craziest solo Flea ever played (like the one in Coffie Shop), but the song still deserves a spot in this list. Chorus line goes from slap to fingerstyle playing with groove breaks that can also get tricky to master.

Get Up And Jump

A true early Flea classic. Learn how to play it if you can. The verse groove is not complicated when it comes to which notes you need to fret down. But, it is performed so quickly. You need a lot of stamina in your right-hand to be able to slap this one and keep it going over long verse passages. Playing this one with a live band is added difficulty. Your drummer needs to be tight (aren’t they all LOL?) and you need to do a great job not to confuse him. Don’t be a slacker, be a master time-keeper instead.

This song features a classic funky bass line we expect to hear from Flea. The chorus features some crisp slap playing that’s on the moderate difficulty. What will get you worked up is putting these two parts together: verse fingerstyle grooves featuring all those licks and then making a ‘more drastic change’ (Dave Navarro quote) and going for the slapped chorus. For those of you lazy to learn songs, there are lots of changes in harmony, so it’s a brainstrain to say the least. The song is doable – but it’s not as easy as it appears after a first listen.

If You Want Me To Stay

This song is a tribute to Red Hot Chili Peppers’ significant influence – Sly and The Family Stone. It’s a funk classic. A really fantastic song to play on bass. So what’s difficult about it? The overall staccato driven groove is quite challenging to get down just right. Some chord changes are unexpected. It takes time to memorize them all and internalize the groove.

That was a fantastic journey through Flea’s bass playing with the Chili Peppers, wasn’t it? Doing this kind of analysis of bass lines in songs is cool, and I recommend that you do it whenever you get a chance.
It’s the kind of practice you can do without a bass on the way to work. Just fire up Spotify and listen carefully to the bass line in the song you are analyzing.

Things to focus on:

Learn How To Slap

If you need help learning how to slap on bass, go check out my Slap Bass For Beginners course.

This step-by-step course starts from zero and takes you to learning fundamental slap and pop bass techniques needed to play your favorite RHCP songs.

You can find out more about the course and enroll by clicking on the link below: 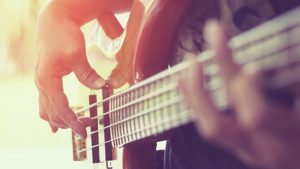 Learn Slap Bass from scratch! This slap bass fundamentals course helps you get funky and stand out from the crowd.

If you’re serious about bass and would enjoy step-by-step online bass lessons and courses, then I suggest checking out how Bass Road Academy online bass courses can help you get results.

Bass Players Shouldn't Use Pedals...
The Biggest Obstacle To Learning Bass
Record Bass At Home - 3 Ways To Do It
10 Easy Bass Riffs (Songs to Learn)